When a Bumper Sticker Saved My Neon 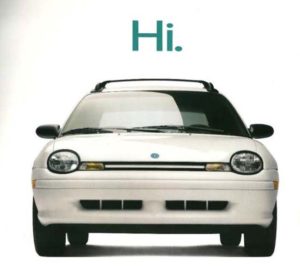 Back in the mid-90’s I drove a Plymouth Neon. A humble four banger that got me from A to B. ‘A’ was Providence, RI (specifically the east side) and ‘B’ was Mansfield, MA. I lived a stone’s throw from the brief stretch of highway that went over the Seekonk River into East Providence; not the friendliest place on earth, to say the least. My apartment building housed four units and had a twin on the other side of a shared driveway. That driveway led to the back of both buildings and eight covered parking spaces. It was at these spaces that I found myself amongst my neighbors one particular morning.

As we all left our apartments to go to work, we found our cars had been broken into overnight. Windows were smashed and stereos were missing. Back in the mid-90’s, people still had banging car stereos – Pioneer, Sony, Blaupunkt, and the like. Some even had equalizers, a series of sliders that would allow you to adjust the frequency ranges of a song. Others had attenuated screens that appeared from under the stereo and folded into viewing position. For my neighbors, their stereos and door-mounted speakers had been forcibly removed. Anything not nailed down in the cars had been taken. Except mine.

At first, I thought it was because it had a crappy, factory stereo that let you do little more than adjust treble and bass, but my neighbors’ bargain Fords and Chryslers had also lost their factory rock boxes. Next, I thought it was because it was a Plymouth. Plymouth was always the persona non grata of Dodge. So much so that the brand was canceled a couple of years later in 2001. Then, I thought it was because I made a habit of not leaving anything inside that wasn’t kept in the trunk. Not even loose change. I’d seen too many pieces of paper taped to passenger side windows that read, “Nothing of value inside.” As I did a few laps around my car, I struggled to figure out why mine had been left alone when my neighbors had not. That’s when my attention was drawn to my back bumper.

Before the phrase became ubiquitous, “Thank You For Not Smoking” was a popular bumper sticker put out by the American Cancer Society. Its familiar red, white and blue message was found on the backs of cars, inside high school lockers, and adhered to electrical boxes in every major city. The stickers became so popular, they became worthy of parody. The American Cannabis Society sold just such a sticker that read, “Thank You For Pot Smoking.” This sticker resided on the right side of my back bumper.

Mid 90’s Rhode Island cops approached vehicles from the right back then, so I wanted my message understood loud and clear should I ever get pulled over. I was a lot bolder in my youth. Well, my message rang loud and clear with whomever helped themselves to the contents of my neighbor’s cars, because not a thing had been done to my Neon. Every window was intact, no tires had been slashed, and my morning had not been ruined. I didn’t have to talk to the cops and I wasn’t late to work. All because I had the courage to wear my heart on my bumper.