01: Hemp CBD Products, How to NOT get High with Cannabis

In today’s episode of “How to NOT get High with Cannabis,” we’re exploring hemp CBD products.

If you or someone you know are particularly hesitant about trying cannabis for fear of getting “high,” hemp CBD products can be a great place to start.

Even if you live in a place where marijuana is still illegal, you’ve probably seen ads for CBD or “hemp extract” products. As of now, CBD is the most widely known and studied non-intoxicating cannabinoid found in the cannabis plant.

Because CBD can be derived from marijuana and hemp (which are both in the cannabis plant family), CBD can be sold nationwide since hemp (defined as any cannabis plant with less than 0.3% THC) was removed from the Schedule I drug list in the Farm Bill of 2018 at the federal level.

Note: The Farm Bill of 2016 made it legal for states to set up their own hemp cultivation laws. Many states began cultivating hemp at this time and distributing it across the country, but there was a lot of confusion around the legality of hemp states that did not have hemp programs. The Farm Bill of 2018 helped to clarify the legal status of hemp across the country, but it essentially reassigned authority of regulation from the DEA to the FDA, and the FDA (as of the writing of this article in April 2020) still has yet to issue formal guidelines about the commerce of CBD. This has extended the confusion around CBD, and many big media corporations and banks still are not willing to work with CBD businesses.

How does CBD work?

CBD is a cannabinoid, which is a compound found naturally both within our bodies and in the cannabis plant.

Cannabinoids support our endocannabinoid system, which keeps all of our other systems in balance as we encounter stress throughout our daily lives.

Unlike THC that binds to and stimulates endocannabinoid receptors primarily located in the brain and central nervous system, CBD’s primary function is slowing the breakdown of our body’s naturally produced cannabinoids so that our bodies can use more of them.

Note: CBD does loosely bind to some receptors throughout the body, but it primarily slows the breakdown of anandamide, the endo-cannabinoid that plays a key role in managing our pain, mood, appetite, stress, and sleep.

This means that CBD, on its own, cannot get you “high.”

But, you say, “my CBD has trace amounts of THC.”

All cannabis plants, hemp included, will have trace amounts of many cannabinoids — including THC. We’ll dive deeper into this in another video about cannabinoid ratios, but know that these trace amounts (under .3%) are not enough to make you feel “high.”

In fact, studies suggest that CBD with trace amounts of THC and other phytonutrients such as terpenes are actually more effective than when CBD is isolated on its own — so ideally, you want to be looking for “whole plant” or “full spectrum” CBD products. …Unless you’re concerned about drug testing. If you are, learn more about the different types of CBD and how to choose which one is best for you with Hempsley, here.

Looking for trusted CBD products? Hempsley does extensive research and certifies every product we carry, so you can always shop with confidence. Visit our online store at shophempsley.com — and reach out any time with questions, we are always happy to help! 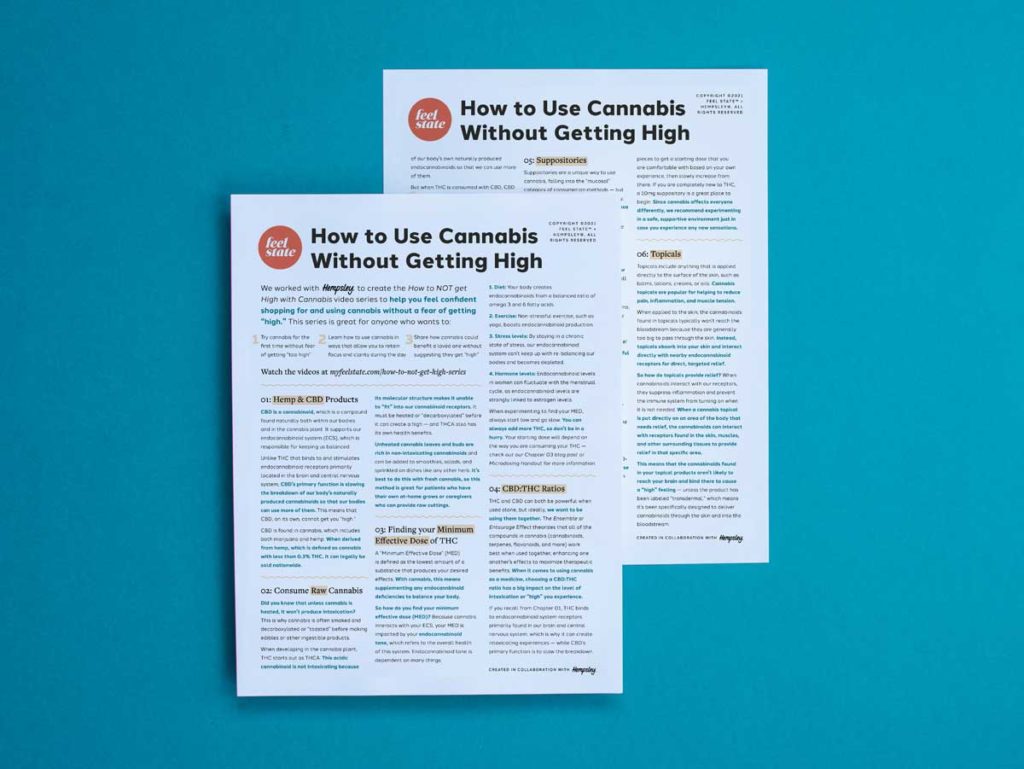 Tips for Consuming Cannabis for the First Time